Crosslake, Minn. (June 7, 2014) – Wonder what Alexander Graham Bell might say today about the evolution of his “electromagnetic telephone?” Given that the modern smart phone fits nicely into your pocket and works everywhere you take it—a dramatic departure from enormous earphones, rotary dials or connected tin cans—it’s a safe bet Bell would be an instant convert to modern technology.

Not sure if old ‘Xander was an angler, but there’s little doubt he’d be amazed by our current ability to “communicate” with fish and fellow humans alike.

Following a roughly parallel and revolutionary path, the angling electronics architects at Aqua-Vu® both originated and re-invented the underwater viewing system, all within the span of decades (as opposed to centuries.) While pricetags and physical size of these fishing cameras continue to shrink, convenience, functionality and visual interface have all expanded exponentially. Case in point is Aqua-Vu’s new Micro 5c, a self-contained underwater video viewer with a spacious 5-inch LCD, compact, covert optics plus a minimalist pricetag.

Equally at home in freshwater and the salt, frozen water or in the boat, the Micro 5c is as portable and convenient as the phone in your pocket. Punch a button and call up the live video viewer. Deploy the acorn-sized camera optics with a quick flip into the drink. Sit back and enjoy the underwater show, as fish and their world reveal themselves in vibrant color video. 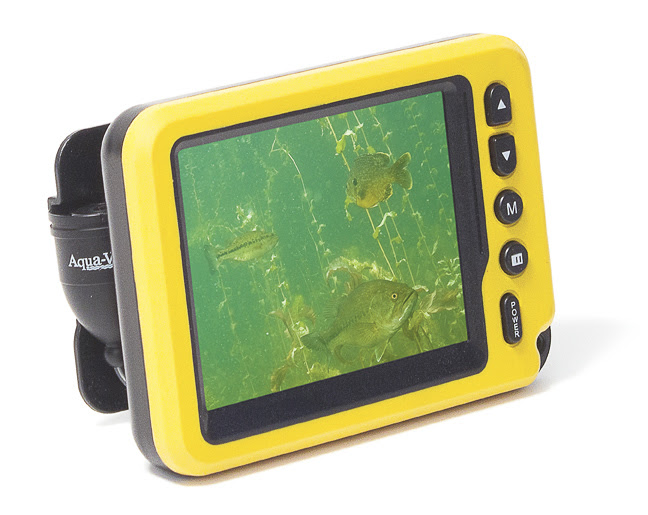 Drop the Micro Cam into those tight spaces under boat docks, where big bass, crappies and sunfish hover and hide. Discover their depth and position, then deploy your lure and set the hook.

Commune with crappies chilling out in tangles of limbs, brush and trees. See for yourself in real-life and real-time, exactly what’s living there.

As Alexander Graham Bell once devised an amazing method for communicating remotely with friends and other folks, Aqua-Vu continues to give anglers the best, most direct connection to the fish. Think of it as video conferencing with Mr. Bass, on an up-close and personal level.

The Micro 5c’s generous 50-feet of camera cable wraps cleany to the back of the unit.