Someone once said that it’s better to be lucky than good, but the reality is, luck’s got nothing to do with it.

What anglers call ‘good luck,’ in fact, is often little more than your ability to give off positive or neutral scent vibes. Deer hunters go to great lengths to eliminate offensive, unnatural odors that make big bucks bolt. Chemical odors, such as tobacco, gasoline, bug spray or even cologne can put fish off the feed as fast as clanging an anchor on the boat floor. Some humans are doubly unlucky, with body chemistries that put off natural pheromones undetectable by us, but as foul to fish as fetid cheese (with apologies to catfish.) Hunters even go so far as to bathe and wash clothes with special scent-elimination products. 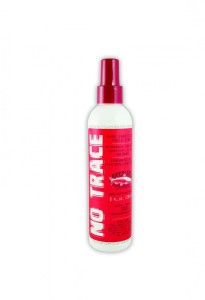 In the fish world, scent (or lack thereof) is even more critical. Salmon and catfish can detect amino acids in water at less than one part per million. While virtually every other species—bass, walleyes and panfish included— typically taste their food before choosing whether or not to swallow it. In all cases, hands inevitably come in contact with lures and baits; but if you think deer can smell you coming, try tying on a lure with paws drizzled with gas and oil, digits dotted with Deet®, fingers festering with nicotine. That’s a recipe for bad luck. But it’s also why the squeaky clean scientists at Rippin Lips recently released No Trace®– a potent new scent elimination spray capable of reversing f ishing fortunes.

Developed over a two-year testing phase by scent specialist Kirk Kellough, No Trace doesn’t cover up odors, it destroys and eliminates them. “Spraying No Trace on your hands feels a little like you’re washing with the cleanest water on earth,” says Kellough. “There’s no scent, color or residue left behind. But the results are immediate—you’ll notice an instant lack of any scent whatsoever. Smoke, gas, bug spray, sunscreen—it not only knocks out all odor molecules that repel fish, you can even spray it on a pair of old gym shoes and notice an immediate lack of odor.”

The natural feel and unmistakable results, say Kellough, stem from No Trace’s completely organic composition. “The properties of this stuff are really quite remarkable. Not only is it earth’s most powerful antimicrobial agent, No Trace also works as a natural antiseptic and disinfectant. It’s also totally safe for our fisheries. Any No Trace that enters the water has absolutely zero impact—it’s sort of the other meaning behind the name.

“We wanted a product that both removed negative scent from hands and lures, and also one that was 100-percent environmentally safe. No Trace does both.”

Formulated with all organic compounds, No Trace quickly and naturally eliminates the artificial odors that repel fish of all species. Apply the clean unscented sanitizer directly to your hands to terminate odor molecules, including smoke, gas, bug spray, other synthetic contaminants and even certain off-putting human pheromones. Go from smelly and fishless to clean, invisible and successful.