Crosslake, MN (July 6, 2013)– It was the summer of 1997, and no one—including professional anglers or top guides—could believe what they were seeing. A remarkable new fish-finding device had just been invented, providing an amazing conduit into the underwater world. Anglers suddenly found themselves eye-to-eye with lively bass, crappies and trout, as well as their underwater habitat—and scuba gear wasn’t required.

Sixteen years and numerous patented technologies later, Aqua-Vu® is set to unveil the next generation in Underwater Viewing Systems. With plans to present the dynamic device at the 2013 ICAST Show—July 10, 11, 12 in Las Vegas, NV—the Aqua-Vu® WiFi will reveal and merge two extraordinary technologies in a single wireless video device.

With WiFi, anglers immediately inherit the ability to view underwater video on their smartphone or tablet—live, wirelessly and in real time. Working in conjunction with an Aqua-Vu WiFi underwater camera and transmitter, vibrant color video can now be played on wireless devices from anywhere in the boat, shore or ice—with a range of 100 feet plus. 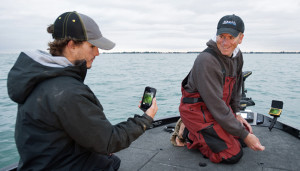 Imagine the applications . . . Network and link to underwater cameras deployed by anglers in nearby boats; view underwater video remotely on ice; monitor fish as they examine your presentation, from anywhere in the boat or inside your ice house; receive real-time video feeds from underwater “trail cameras”; record actual underwater footage of a hotspot and link it with a GPS coordinate for reference.

Now imagine capturing video from a dingy lake, and transforming it into crystal clear water . . . 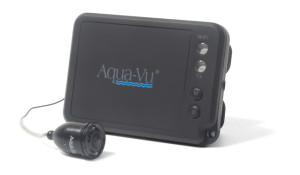 “The Aqua-Vu WiFi represents an entirely new generation of underwater viewing technology,” says Ben Gibbs, president and CEO of Outdoors Insight, Inc., parent company of Aqua-Vu. “Not only does WiFi allow anglers to use their smartphones or tablets to view video remotely and wirelessly in real time, our exclusive Looking Glass app transforms underwater video in waters where clarity and visibility had historically been a limiting factor. This new app clarifies dirty water and illuminates water during low light. Looking Glass reveals fish and structure that previously couldn’t be seen.”

Available to consumers in fall 2013, the Aqua-Vu WiFi Complete System (MSRP – $349.99) includes a high-resolution Micro™ Camera and a wireless transmitter contained in a pocketsize housing. A long-lasting lithium ion battery (with charger) powers the system. For use with any existing underwater camera, the Aqua-Vu WiFi Adapter features a wireless transmitter and camera adapter (MSRP – $299.99)