Crosslake, MN (October 29, 2015) – Kim and Danny Stricker see things most anglers only dream about. In their nine seasons of filming Hook n’ Look—the Telly Award winning fishing program airing on the Outdoor Channel—the father and son duo have spent hundreds of hours literally swimming with the fish. Besides the unique underwater perspective exhibited in each episode, the Strickers employ specialized audio devices enabling a scuba diver to communicate with an angler in the boat. 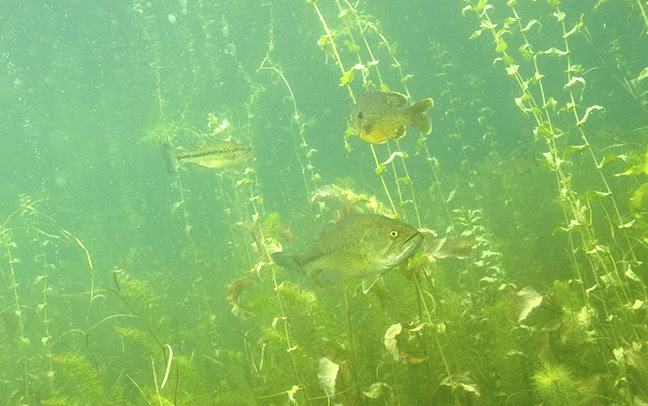 In an early episode, the Strickers recounted how Kevin VanDam didn’t believe how many smallmouth bass they spotted in a small area, because they simply refused to strike. “It’s mind boggling to realize how many bass are down there that we often fish through without a bite,” VanDam observed.

For the Strickers, incidents like this are no longer surprising. They’ve observed bass, baitfish and other species doing things that might blow most anglers’ minds—including, at times, even KVD himself. “The goal of the show has always been to educate anglers on all the cool stuff that’s really happening beneath the surface,” says Kim Stricker, who won the BassMaster Michigan Top-100 event on Lake St. Clair in 1994.

“We realize, of course, that most anglers will probably never use scuba gear. It’s one of the big reasons we started using Aqua-Vu underwater cameras several seasons back. These little fish-viewers show anglers the same amazing things we see down below. On Hook n’ Look, the Aqua-Vu gives our guest hosts—and ultimately, our viewers—a cool underwater experience, similar to what we encounter while diving.”

Beyond the broader advantages of confirming signals on his sonar units, Stricker extols a camera for species ID. “We filmed a show with Mark Gibson from Humminbird, and found a big school of fish on sonar. Mark and I spent an hour trying to get them to bite. We thought it was going to be a great smallmouth spot. But when we finally went underwater and dropped the camera, we found out the fish were suckers.

“Imagine how much time we could have saved, if we would have deployed the camera right away, rather than assuming the fish on sonar were bass.” Stricker estimates anglers spend countless hours fishing each year for the “wrong species” or fish not likely to bite the lures they are offering. The issue, he says, is often a misdiagnosis of the fish anglers spot on sonar.

“Other than scuba diving, the only way for anglers to gain this information is to employ an underwater camera. On sonar, bass can look almost identical to many other species. But I can drop the Aqua-Vu and in less than a minute, see exactly what’s down there. It’s huge.”

A similar advantage can be gained when using a camera to study the baitfish and other critters gamefish key on. “Everyone struggles trying to figure out what to throw or the size of the baits they should use,” adds Stricker. “It can be the total difference between a skunk and an ace day on the water. We recently shot a bass show in the Hayward, Wisconsin area. The camera revealed schools of young-of-the-year yellow perch, followed by pods of big smallmouths. Turned out to be vital visual information that led us to a truly epic pattern. We tied on appropriately sized jerkbaits and hooked a beautiful batch of smallmouths.” 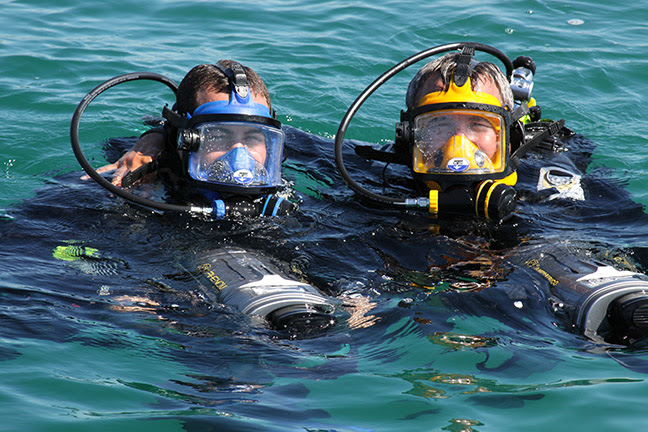 On Lake St. Clair, Michigan, Stricker noticed little holes in areas with sandgrass on the bottom. He eventually spotted gobies burrowing into these openings. He’s also spied gobies living inside hollow logs. In both cases, Stricker observed that gobies lay their eggs on the ceiling of the burrow, rather than on bottom.

Elsewhere, he’s seen massive crayfish colonies piled into craters in large logs, hiding from bass. “Big smallmouths continuously patrolled the log, picking off any crayfish that wandered outside the hideout.”

Another awesome predator-prey interaction Stricker has gleaned through underwater observation is the link between bluegills and largemouth bass. “We can move through a huge weedbed without bluegills and won’t spot a single bass. But as soon as we start seeing sunnies, big largemouths are almost always on patrol nearby. It’s one of the most reliable patterns in bass fishing. Yet finding bluegill schools in deeper water or buried in vegetation can be nearly impossible, unless you’re diving or using an underwater camera.”

Stricker says he’s been amazed when swimming beneath matted vegetation, and notes that fish and bait positioning is a key element many anglers overlook. “Diving under milfoil, hydrilla and pads, especially in slightly deeper water, has shown us that bass can relate to very specific areas, or hover at precise levels. Sometimes, we see them lurking just beneath the cover. Other times, bass are buried down deep. Without this knowledge, you can spend a lot of time fishing the wrong presentation—tossing a weedless frog for fish that are buried and inactive, or pitching a heavy jig that quickly plummets right past the snouts of big bass hovering just under the mats.

“It’s incredible, too, how bass consistently choose to swim through the same lanes in dense vegetation—almost like a game trail. By identifying these heavy-traffic routes, you can hook some monster bass. 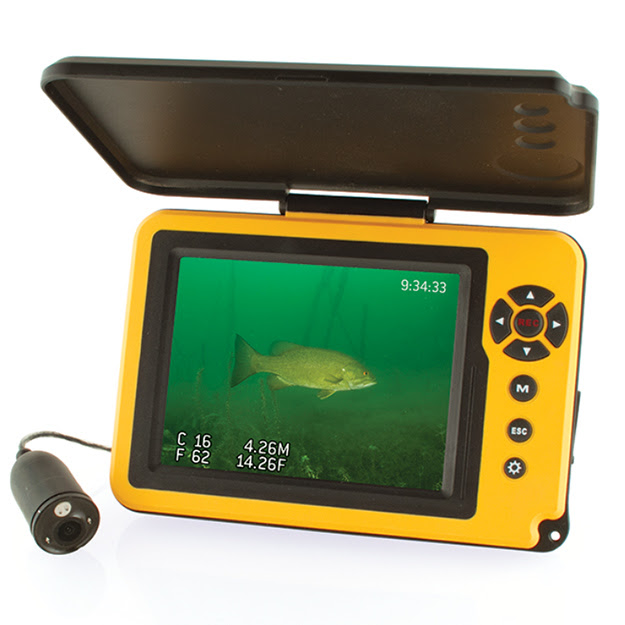 “Anyone can do this sort of underwater investigation with a camera. We even attach the optics to the end of a telescopic painter’s pole and probe into specific spots. We do this under docks, too, and it’s a major time saver that shows us the presence and position of bass and other fish.”

Additionally, on a recent filming run to Kentucky Lake, the Strickers uncovered minute details on the bottom that led to a great catch of bass. “Veteran anglers on Kentucky know the importance of mussel beds. But how do you find these areas with conventional methods? It’s almost impossible. We were amazed that even in off-colored water, the camera showed us the mussel beds, clear as day. You don’t need to see fifty feet underwater in order to learn something.

Sometimes, all you need to see is two to five feet in front of the lens to uncover a sweet spot.”

While filming with “Mr. Crappie” Wally Marshall on Broken Bow Lake, Oklahoma, the Strickers observed massive crappie schools exhibiting some oddball behavior. “While diving in deep cedar brush in 20 to 30 feet of water, we noticed that all the crappies were facing the same direction. You couldn’t explain it; we detected no current down there or other obvious rationale. But it made us realize, sometimes there’s a reason we catch all our fish while trolling in one particular direction.”

A final observation, more elusive than visible cover and fish presence, relates to water temperature. “The thermocline is important to bass fishermen whether they know it or not,” Stricker affirms. “We can actually feel the temperature change when we swim through it. And oftentimes, you can see it too. We’ll notice a milky layer of water that signifies the thermocline.

“Bass position near or just above this level—especially in summer and fall. The depth of this dramatic temperature layer can change overnight. So it’s important to stay on top of it. Anglers can use a camera, such as the Aqua-Vu Micro DT, which shows digital depth and temperature on the screen, and gain this same high-level angling intel, all without actually taking the plunge.

“For anglers with inquisitive minds,” says Stricker, “a whole other world of fishing discovery awaits. Whether you see things through a scuba mask or a camera lens, some amazing secrets lurk beneath the surface.” 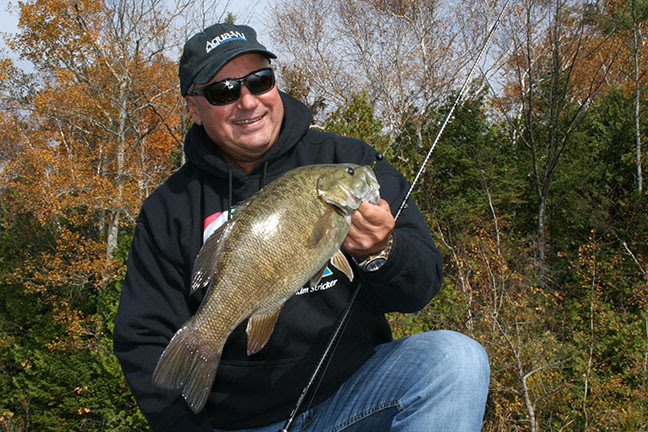