Flurry of Flash and Fury

Traverse City, MI (January 27, 2015) – Contrary to popular belief, predator fish are not always the unwavering marauders anglers make them to be. A brisk barometric crash or climb, intense-fishing-pressure or a misjudged moon phase can take their toll on of the moods of even the most ferocious fish.

Overall, when the bite for big fish, well, bites, it takes something extraordinary to grab their attention and reinvigorate that killer instinct.

Allow us to re-introduce Keweenaw Tackle Company’s Fin-Wing – a uniquely-shaped spoon that produces bursts of brightness from every angle as it literally “swims” towards the surface with every lift of your rod tip, and then flutterers enthusiastically on the fall.

Ice anglers targeting big predator fish – pike, walleyes, muskies and lake trout – often find that large sweeping jigging motions with a Fin-Wing garner the most attention, either fished alongside structure like weeds, wood or rock, or out in the open of a main-lake basin. But once a beast is spied on sonar, a less aggressive rise-and-fall action is the typical call-of-duty. Sometimes, nothing more than the nervousness produced by shaking the rod tip will convert a follow into a strike.

The dramatic Fin-Wing is available in 1/4, 3/4 and 1 ounce sizes. There are a dozen classic colors to choose from, 10 with translucent hues, and all tinted with UV paint for every degree of water clarity.

Swim. Flutter. Flicker and flash. The Fin-Wing generates it all, including aggressive strikes from the biggest predators under the ice. 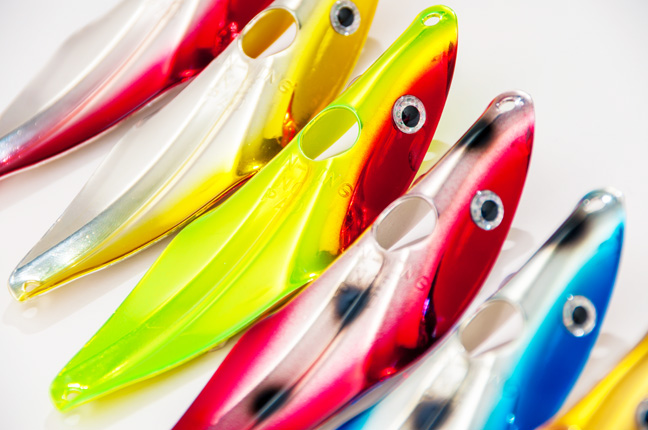