OLD TOWN, ME (July 2, 2015) – You’ve probably heard the adage that 90 percent of the fish live in 10 percent of the water. Spend enough time studying your fishing electronics and you’ll know there’s some truth to the old saying. 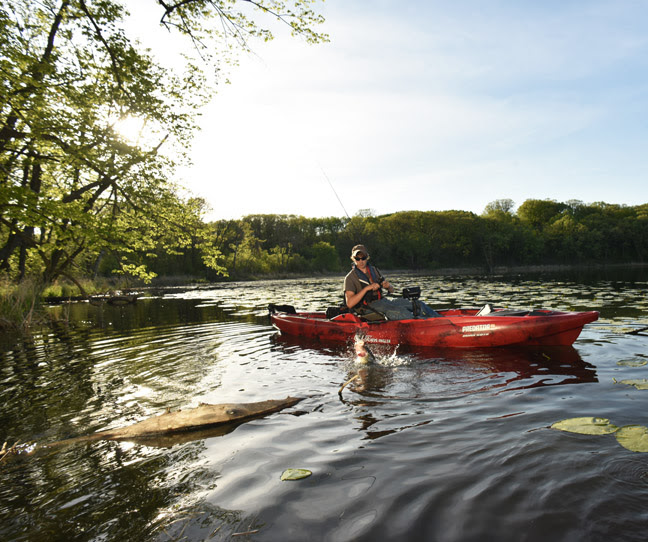 Over a half century ago, fishing pioneer Buck Perry taught us that fish relate to structure – depth transitions along the underwater landscape – and within this structure, cover like rock, wood, vegetation and manmade habitat. In a nutshell, the proverbial fish-holding 10%.

Still, sometimes that 10 percent can be hard to reach in a typical 18- to 20-foot bass boat or multi-species rig. Think river backwaters, bays, coves, creek channels and small rivers.

But not for kayak anglers, whose easily-transportable vessels glide through skinny water, are easy to portage over land where necessary, and offer superior maneuverability.

Fact is, kayak design has evolved to the point where each year more anglers are turning to the small watercraft as a viable alternative to traditional boat designs. It’s not that kayak anglers can’t and don’t fish from larger boats – it’s just that they prefer the advantages of a kayak.

Again, kayaks are easy to transport, launch and load on hard-to-reach waters virtually untouched by anglers in larger boats. Like dumping right off a bumpy, dirt road into a bass-filled lake without a boat launch. Or near bridges where giant grouper wait like trolls … and tarpon shimmer in the sun. Or backwater or tidal areas where ravenous redfish fin through schools of bait, pouncing on anything thrown their direction.

And new kayak designs are stable in still or moving waters. I know this for a fact, having fished trout and salmon out of a kayak near the breakers of Lake Michigan. Its stability in rough water was impressive.

No water is impenetrable with a kayak. Outdoor writer Jim Edlund remembers fishing Lake Fork with a bass pro a few years ago when we spied two boats off in the shallowest, most timber-laden section of a cove. They could see bass far back busting bait – just past where they could easily maneuver.

“Here come the kayaks,” announced the pro, “they’re like a cult …”

Edlund nodded: “A cult that can get back to the fish we can’t.” 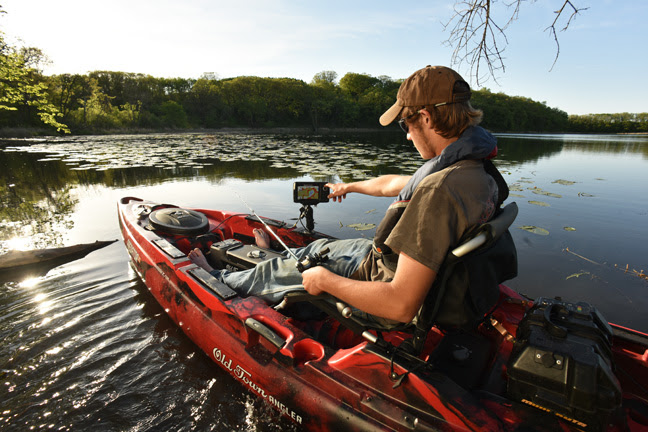 Not only do kayaks put anglers right where the fish are, kayak anglers are taking full benefit of all the high-tech features of boats many, many times their cost – like Humminbird electronics with a full complement of technologies including 2D sonar, Down Imaging, Side Imaging and high-definition LakeMaster mapping.

Along these lines, there’s a lot of buzz on the water about Humminbird’s new Helix fishfinder family. Consider that the Helix 5 SI GPS brings anglers all these technologies for under $500. And with the Helix 5 Sonar GPS an angler can get sonar and GPS with a wide, high-definition display for under $300. Recently introduced Helix 7 is another great option for anglers who want a larger screen. Both the Helix 5 and Helix 7 offer functionality that would have cost thousands just a few years ago.

Models like Old Town’s Predator Series are even engineered to accommodate stand-up fishing with an included assist strap or optional steady-stand bar. That means pitching, flipping – even fly-fishing– is possible from the right vantage.

The kayak that caught the attention of the fishing media at ICAST 2014 (where it won “Best Boat” and overall “Best of Show”) – is the Old Town Predator XL Minn Kota tri-hull fishing kayak, which at 13 feet long and three feet wide, has a whopping 600 pounds of carrying capacity.

Not only that, it’s designed for anglers to fish completely hands-free at will.

And the power comes sourced from a company we’ve come to rely on over the years to salad-slice our bass boats through some pretty serious slop: Minn Kota.

It’s ingenious, really. The Predator XL Minn Kota is designed to accept any of three XL consoles that fit into the hull of the kayak cockpit. The most impressive of the three is the Minn Kota motor console, which provides 45 pounds of variable thrust, forward and reverse, and saltwater-grade power. Boat control is accomplished via a foot-controlled rudder system, which means you can move from spot to spot with ease, troll, and maintain precise boat control … without ever lifting a paddle. The motor was also designed with minimal operation noise, which means fewer spooked fish. 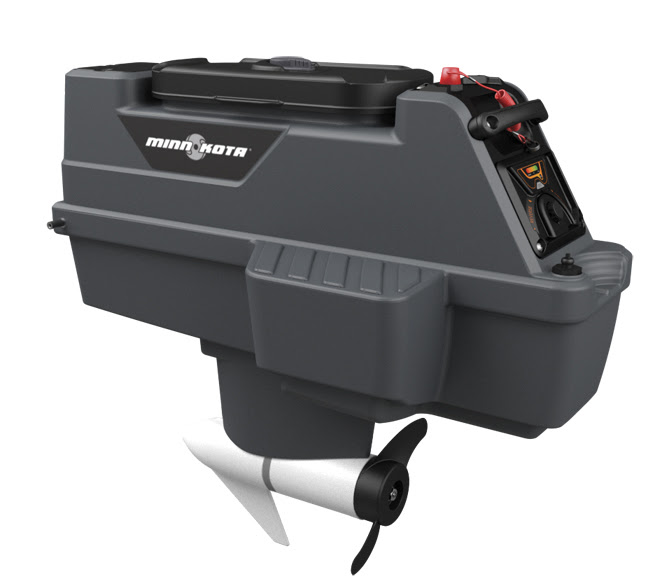 With regards to power, the Predator XL Minn Kota features pre-run wiring with trolling motor plug-in outlets fore and aft. There is ample space right behind the three-position Element Seating System to carry your favorite brand 24- or 27 group size 12 volt deep cycle battery for long days and nights on the water.

Speaking of power, some anglers are going the route of less weight, more consistent power and faster recharge times via lithium deep cycle batteries, like those available from Solarsportsman.com. While their benefits are many, lithium technology is not inexpensive.

For those who prefer paddles to motors, the Predator XL is available with two other problem-solving consoles. A motor-less large-capacity utility console makes a great baitwell/livewell – especially with the addition of a Frabill Aqua-Life Spray Bar aeration system – but will also function as a cooler, or storage for fishing electronics battery and tackle boxes. Or anglers can go minimal with the flush-to-floor Exo-Ridge console to maximize room for stand-up fishing. 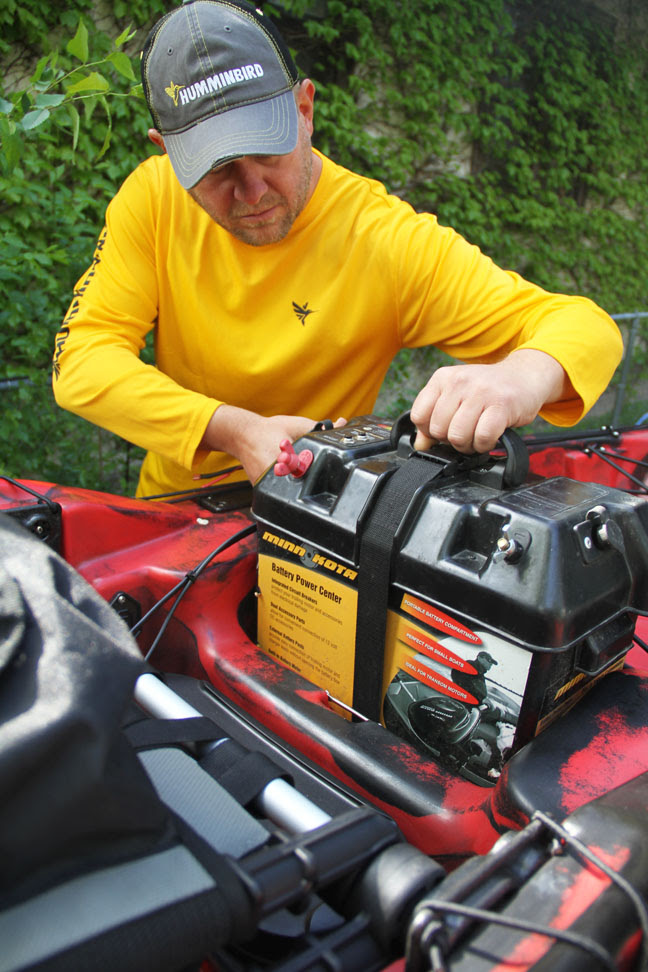 Fishing industry PR guy Noel Vick is a passionate, arguably neurotic kayak angler. With an office located an hour north of Minneapolis, Minnesota, he is squarely situated amongst primo small to midsize lakes and manageable moving water. Kayak nested in his FLOE Cargo Max trailer, Vick not only puddle jumps locally, but also commutes hither and yon, considering his kayak as essential to travel as a toothbrush and clean boxers.

“The kayak is man’s best friend,” said Vick. “It goes everywhere with me. Last year alone that meant trucking from Minnesota to Arkansas, Texas, Florida, North Carolina, Tennessee, Iowa and Missouri. And the boat doesn’t sit idly in my trailer, either. I’m fishing it at every opportunity – trust me.”

Vick is known to squeeze blood from turnips, laser pointing micro pieces of water in areas he’s conducting business, and launching immediately after the final handshake. “Never, and I mean never, have I been on the road and not been able to find fishable and kayak-able water. Nothing better than mapping prospective water near the hotel and then blasting fish before sliding the key card for the night.”

This past year, Mainhart watched the December weather until it was possible to troll the break walls of Lake Erie for giant nighttime walleyes. Two days before Christmas everything lined up and he slipped the 13-footer into the world’s 11th largest lake. 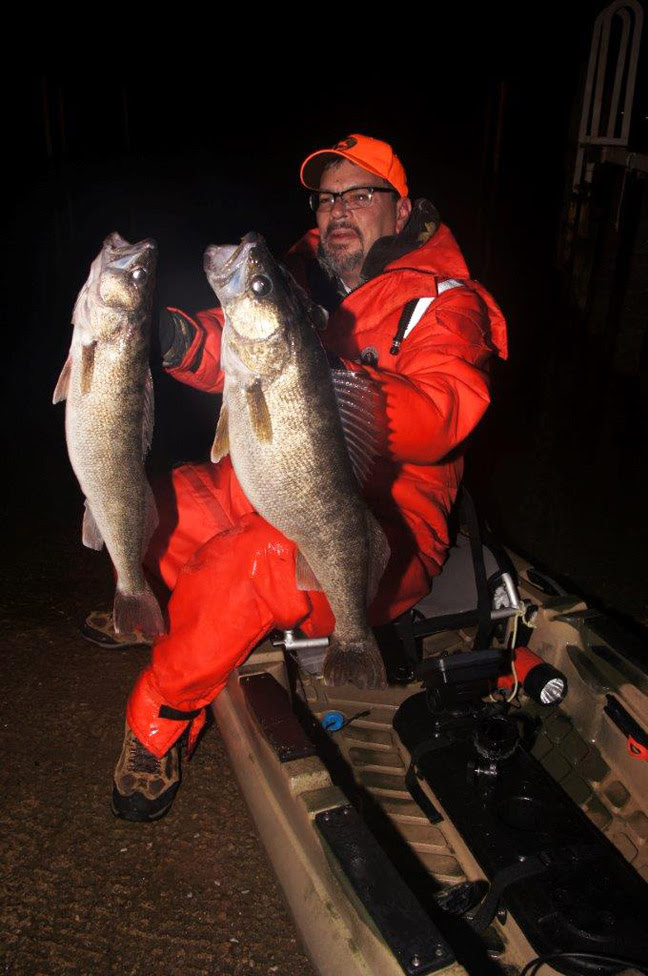 “The Old Town Predator XL is made for big-water conditions, but I also have all my safety equipment, including wearing a Mustang cold-water survival suit,” says Mainhart.

“The lure of trolling for hog walleyes along the piers and breakwalls of the central basin in late fall was one for my bucket list. Especially if I could pull it off with a kayak.  But the conditions were perfect – a light south breeze and waves less than one foot. The air temp at launch time was hovering around 50 degrees with a low forecast in the low 40s.”

Mainhart’s plan was to “practically scrape the paint off a Smithwick Perfect Ten” by flat-line trolling right against the breakwall.

“The water depth within arms’ reach of the wall was holding around 13 feet with humps and peaks up to eight feet – the perfect depth for late-season walleye after dark. The soft amber-glow view on my Humminbird’s Down and Side Imaging was showing some amazing imagery of the rocky bottom near the wall. You could actually see large fish (marks) tucked in-between the peaks and valleys created by the rock structure,” adds Mainhart.

He and fellow fishing writer Paul Liikala fished a few hours that evening from their separate boats, keeping in sight of each other’s lights for safety.

And Mainhart accomplished what he set out to do. One more bucket list item crossed off, thanks to the Old Town Predator kayak.

“Under the ramp lights, it was plain to see the true size of the hog. That first big walleye tipped the scales at 12 pounds with the second coming in at eight. For me, it was an amazing achievement with a kayak.”

Not only are freshwater anglers fishing everything from farm ponds to the Great Lakes, bluewater anglers are taking to the sport with zeal.

Meanwhile, back inshore, the Minnesotan Vick swears the stork dropped him off in the wrong zip code, even time zone – guy should’ve been born alongside at least brackish water. So driven by his saltwater DNA, he pounces on every opportunity to kayak and cast inshore waters.

“Honestly, it might be the absolute finest form of fishing. The control and accessibility a kayak affords fishing inshore waters is unparalleled. I immediately think about sliding through slivered spaces on Louisiana saltwater marshes to reach bull reds inaccessible by motor. Or deftly micro-managing around dock lights for snook. Or having so much boat control you virtually suspend in animation over seatrout a rod’s length from a bridge piling in a rip – something you’d never test riding fiberglass with a 300 in the back.”

So, whether it’s fresh- or saltwater – kayak fishing is here to stay. Anglers across the globe are choosing to fish out of smaller craft because the advantages are many, not to even touch on the cost savings.

And that fish-holding 10 percent of the water? Old Town and Ocean Kayaks will get you there.

Imagine paddling a few miles to reach some secret spot, catching fish until your arms and shoulders are sore … and then realizing you can motor back to shore, nursing a cold bottle of water, relaxed and feeling victorious.

That’s the true power of the Old Town Pro Angler XL Minn Kota, the ultimate fishing machine – easily and infinitely customizable for exactly how and where you fish.

Call it the fishing kayak of the future … but it’s here today. 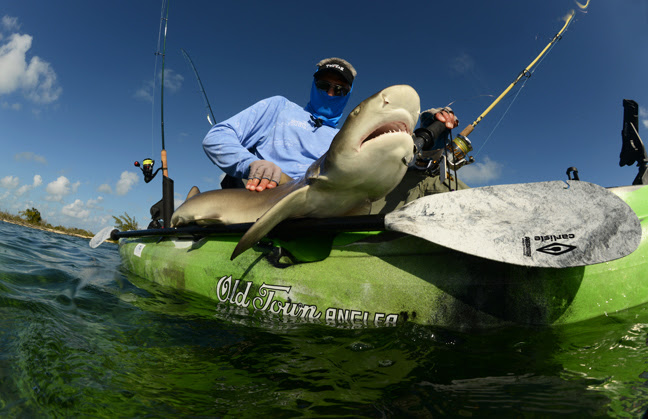 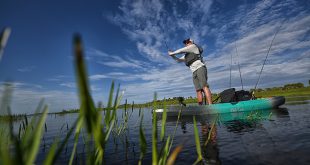