Take Advantage of the Goby Invasion

Niagara-on-the-Lake, ON (February 22, 2018) – Round gobies have forever altered the ecology, and the angling landscape, of the Great Lakes and connected waterbodies. Since their discovery in the St. Clair River in 1990, these invasive stowaways from the Black and Caspian seas have become key players of their local food webs. Indeed, round gobies are among the few fish that consume undesirable zebra and quagga mussels, themselves transported to the Great Lakes within the same ballast tanks that harbored the first goby colonists. At the same time, gobies have become established as integral components of many gamefish diets.

Smallmouth bass are among the Great Lakes gamefish that have benefited dramatically from the goby invasion. Indeed, a study of Lake Erie smallmouth bass demonstrated that while crayfish were the primary foodstuffs of smallies before gobies appeared on the scene, bronze bass rapidly converted to munching gobies – as often as three-quarters of the time – once the invasive baitfish became abundant. Moreover, juvenile smallmouth bass grew longer, and faster, once gobies became their primary forage base. A similar preference for gobies is now established within other Great Lakes gamefish, including brown and lake trout – a fact that savvy anglers can exploit to enjoy bigger, more consistent catches.

Goby Paddle Tails have internal weights ranging from ½ to 1 oz,, helping anglers to mimic the behavior of living gobies by maintaining close bottom contact as baits are worked back to the boat. A slow drift or drag across the bottom brings the bait’s paddletail to life, providing strike-eliciting action and vibration. After the bite, the Goby Paddle Tail’s premium hook keeps bass pinned tight, putting more bronze bombers in the net. The LIVETARGET Goby Paddle Tail is available now, in seven ultra-realistic color schemes, with MSRP $13.49 – $14.49 for a pack of three pre-rigged baits.

The LIVETARGET Goby Curly Tail shines when conditions call for a more lively presentation, or one where the bait swims methodically along the bottom. In these baits, the anatomical precision of the LIVETARGET Goby body is united with a robust, high action tail for enhanced vibration and lifelike swimming action. As with their Paddle Tail counterparts, LIVETARGET Goby Curly Tails are available now, in three lengths, three weights, and seven premium color patterns with MSRP $13.49 – $14.49 for a pack of three pre-rigged baits. 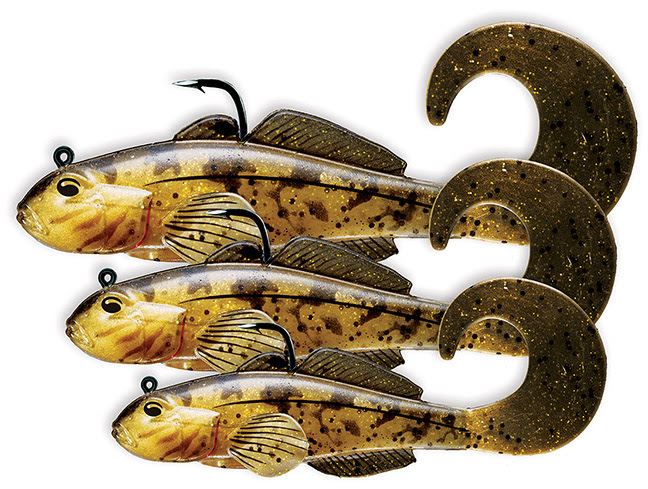 The unparalleled design features of the LIVETARGET Goby Paddle and Curly Tail baits are matched only by the simplicity of the presentations needed for their effective use. Living gobies spend the majority of their time sitting atop their pectoral fins on the bottom, hopping and darting from one rocky perch to another. Savvy anglers deliver LIVETARGET Gobies on long casts and let them settle to the bottom. A series of short hops, delivered with twitches of the rod tip, brings the soft plastic LIVETARGET Gobies to life with subtle wobbling body motion and active tail vibration that elicits strikes from nearby bass, trout, and other goby-munching Great Lakes predators.

LIVETARGET Gobies also have a place in your walleye arsenal. Many a walleye feasts on native darter species, which, aside from their more svelte profile, appear quite similar.

LIVETARGET Goby Paddle Tail and Curly Tail baits perfectly mimic the size, shape, profile, color, and action of their living counterparts. When fishing the Great Lakes, or any other northern waters where invasive gobies or native sculpins abound, LIVETARGET gobies are the best choice for enhancing your catch rate.