Niagara-on-the-Lake, ON (June 7, 2018) – For years, it was a secret shared only by select guides and pros, largely borrowed from the wheelhouse of European pike and zander anglers. Domestically, In-Fisherman Editor In Chief, Doug Stange, was one of the first to demonstrate how lethal soft plastic swimbaits could be on walleye and pike in all kinds of habitat.

Two anglers familiar with these baits are Kyle Agre and Scott Brewer, hosts of “Gone Outdoors Radio” and partners in Brewer-Agre Outdoors, an outreach group that promotes fishing and the outdoors lifestyle.

“Where we fish on Devils Lake, North Dakota, pitching crankbaits and plastics is pretty common place for both walleye and pike. Along those lines, we’re big fans of LIVETARGET swimbaits, which are really the best of both worlds,” says pro walleye angler, Kyle Agre.

“You’ve got the near photo-realism of the LIVETARGET product—the anatomical features, colors, scales, etc.—but also the benefit of superb weedless-ness, which is made possible by a dorsal fin that rides right in front of the hook point. This plastic dorsal fin keeps the large hook weedless when casting up into the wood, weed, or rocks, and the tail puts out a massive amount of vibration. It’s absolutely amazing the kind of cover you can cast these baits into without getting snagged.”

Agre’s tournament and promotions partner, Scott Brewer, adds: “The advantage of LIVETARGET swimbaits is they’re extremely realistic, and what we preach everywhere we go is our first bait choice needs to be whatever replicates the natural forage in the lake. You want to match the hatch. So, it all depends on what kind of food is present in the lake, reservoir, or river you’re fishing, and then choosing the appropriate LIVETARGET swimbait or swimbaits.”

Along those lines, Agre and Brewer spend a great deal of time on North Dakota’s 200,000-acres-plus Devils Lake, a body of water known for its world-class perch, walleye, pike, and white bass fishing. 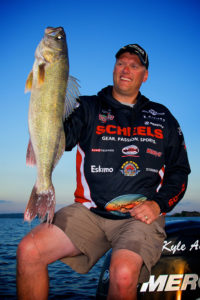 “LIVETARGET’S Yellow Perch is a great option on Devils Lake because the lake is loaded with small perch. We choose the yellow-green pattern because it most closely resembles the appearance of our perch up here. The other advantage is the yellow-green stands out a little brighter in the stained water and is just more visible to the walleyes and pike,” says Agre.

The duo also likes how easily the LIVETARGET Yellow Perch fishes at a variety of depths, speeds, and retrieves. They say it’s the kind of bait that even beginners can fish.
“You cast the LIVETARGET Yellow Perch out, count it down to your desired depth—which is about a foot per second for the ¾-ounce model—and then simply retrieve it back to the boat. Sometimes a straight retrieve is best, sometimes a start-stop-start retrieve is best. It’s pretty easy,” says Brewer.

What they both really like is how fast LIVETARGET swimbaits fish. “When you’re fishing shallow, your 2D Sonar and Down Imaging are pretty limited. You really need to use Side Imaging to help find the weed edges and other cover/structure close to shore. The nice thing about these baits is you can cover and eliminate a lot of water quickly and use them as a search tool to find where the active fish are. This is especially great news for anglers without Side Imaging. And even for us, with Side Imaging, we’d prefer to use LIVETARGET swimbaits as a search tool rather than staring at a screen all the time.”

Agre and Brewer also cover water economically by directing each angler in the boat cover a specific portion of water. “When you’re on waters with a pronounced weed edge—like a lot of Minnesota lakes or Devils Lake—we take the approach that muskie or big pike guys take. The guy in the bow pitches parallel to the weed edge and the guy in the back casts up shallow and probes through the shallow weeds. It’s just a good combination. Then you find where the fish are and go from there.”

Like any specific walleye or pike tactic, some rod, reel, and line configurations work better than others. When fishing LIVETARGET swimbaits, Brewer relies on a 6’6” or 7’ medium-light to medium power spinning rod with extra-fast action tip and Shimano, Abu, or Quantum spinning reel to throw the baits up shallow. “We’re pitching LIVETARGET swimbaits into relatively shallow water, like 10 feet of less. I’m a fan of 8-pound monofilament while Kyle’s a FireLine guy,” says Brewer.

Agre interjects: “I typically reach for a medium-light to medium-power 7’ spinning rod, Shimano spinning reel, 10- to 14-pound FireLine, and an 18”-24” 10-pound Seaguar InvizX fluorocarbon leader. I’m a big fan of the 4.5-inch, ¾-ounce smaller Yellow Perch, especially during the early season. I lean toward the smaller sizes because I think they have more appeal earlier in the year while the majority of the forage is still small.”

“It’s worth mentioning that on a lot of waters Zebra mussels are increasing water clarity and making it possible for fish to really key in on baits. That’s where LIVETARGET baits really shine. Whether you’re fishing these baits slow or fast – on a steady retrieve or with twitches or pauses – fish have a chance to really study the baits and they still get eaten,” says Brewer. 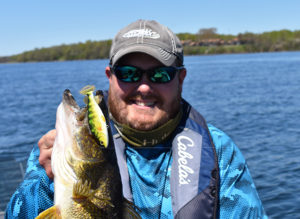 WHERE TO FISH ‘EM: WEEDS & WOOD

“Devils Lake is littered with wood, weeds, rock, you-name-it, and there are often walleyes and pike in these areas. So, as far as cover and structure, we’re pitching these baits in and around fallen logs, trees, fences, weeds, etc. During the early season on Devils Lake, one of the biggest things is making sure your bait spends time along the weed edges. That’s where a lot of walleyes and pike hang out, waiting to ambush prey.

As the weed growth continues to sprout up throughout mid- to late-June, the fish are going to be right in the weeds or weed pockets. Getting to these fish with cranks or jigs can be tough, but these swimbaits really give you a lot of flexibility to reach these fish,” says Agre.

So, what’s the best swimbait retrieve around weeds? Generally, it’s a straight retrieve along the weed edge, punctuated with little hops into the weed pockets. “A lot of anglers overthink swimbaits and jig them way too much. They’re really one of the most simple baits you can fish—a lot of times, all you have to do is cast it out and reel it in on a slow roll. Let the bait do the work. You don’t typically have to jig much,” says Brewer.

While weed growth is typically the biggest fish-attracting factor, don’t overlook wood in the form of brush, laydowns, deadheads, fence rows, etc. “A lot of times you’re going to find wood near weeds and it’s going to hold fish. The nice thing about LIVETARGET swimbaits is you can retrieve them right from the weeds into wood without worrying about getting snagged. They give you freedom to fish areas where you might normally get baits hung up,” says Agre.

Besides LIVETARGET’S Yellow Perch, Agre and Brewer utilize additional LIVETARGET swimbaits for early-season walleye and pike fishing. Again, it all comes down to matching natural forage found in the lake, reservoir, or river being fished.

One of the top menu items for walleyes and pike in Minnesota and the Dakotas is the spottail shiner. As such, Agre reaches for the 4.5-inch Herring in blue/black color. “Especially in the early season, a spottail shiner is the premiere forage for a lot of Midwest walleyes. LIVETARGET’s Herring emulates that really well, perhaps even better than their Common Shiner. It’s really become one of my favorites.”

Another one of Brewer’s favorite LIVETARGET swimbaits is the 3.5-inch Goby in Smoke color, in both Goby Curly Tail and Goby Paddle Tail. “We catch a lot of walleyes with these baits on lakes where you’ve got a good hatch of bullheads. It doesn’t always work, but I always try it. Again, it’s a match the hatch thing. The smoke-colored Goby really looks like a bullhead.”

And then there’s the swimbait play that has zilch to play with matching the hatch, but still works on some waters for big fish. “I’ve had some really good luck catching big walleyes on the LIVETARGET silver/violet trout swimbait—which kind of flies in the face of common sense because we don’t have trout in our lakes—but it seems like there are times when the silver, blue and pink will attract big walleye and pike reaction strikes on Minnesota and North Dakota lakes.”

“The LIVETARGET 4.5-inch Sucker in white/natural is just a killer pike bait. Same with the 3.5-inch Sunfish Swimbait in Bronze Bluegill or Natural/Blue Pumpkinseed. These are our top three big pike producers. Again, it’s that match the hatch program. The lake should have some population of suckers or stunted bluegills. In those cases, you can catch walleyes on them, too, but generally these are pike candy. Pitch ‘em in shallow around weeds or any kind of cover and hang on! Just make sure to add a wire leader or heavy section of fluorocarbon!”