LADSON, SC (MAY 30, 2018) – What looks to the casual observer like the simplest jig and softbait pairing possible has actually become one of the most potent bass-catching systems ever devised. The Ned Rig, brainchild of Hall of Fame fishing writer Ned Kehde, pairs a mushroom style jighead with a small softbait, most notably a Z-Man® Finesse TRD™. The jighead pivots and activates the softbait as it traverses the substrate beautifully, small, sleight hook stinging bass with minimal hookset pressure.
As early Ned Rig methods spread across the continent, the tackle techs at Z-Man already envisioned similar finesse fishing success in dense vegetation and wood. The resulting Finesse BulletZ™ Weedless Jighead now allows anglers to Ned Rig in heavy cover, enticing even more bites in areas where the finesse baits hadn’t gone before.

Simultaneously, advancing the Ned Rig into the realm of realism, Z-Man has revealed its next-gen finesse bait, the TRD CrawZ. Marrying snag immunity with subtlety, the two new Z-Man offerings come together to greatly expand the versatility of an already exceptional method.
Bassmaster Elite Series angler Luke Clausen, who wielded prototypes of the new TRD CrawZ all last year, says the 2-1/2-inch ElaZtech® bait brings biological realism to the basic ‘Ned’ arrangement. “First thing you notice about the TRD CrawZ is how it stands up on bottom and waves its claws, just like a little crayfish,” observed longtime Z-Man Clausen. “How many other crayfish baits can do that?”
The answer: Only those baits composed of buoyant, non-toxic ElaZtech. Most other PVC baits sink to bottom, tip on their sides and . . . die. Conversely, the lively posture of a live crayfish or Z-Man’s Finesse TRD CrawZ nearly guarantee they’ll get eaten. Just ask the bass. 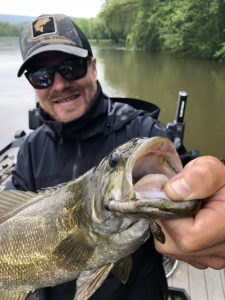 “The TRD CrawZ is a subtle, unassuming little critter,” says Clausen. “But it’s realistic and lively enough to leave no doubt as to what it simulates.

“You can rig a CrawZ on a Finesse ShroomZ or NedlockZ jig or one of the new Finesse BulletZ and get a nice slow rate of fall,” he continues. “Especially in clear water and on pressured bass, this little craw bait’s going to be a player. I’ve even fished it successfully on a dropshot and caught some good smallmouths.” 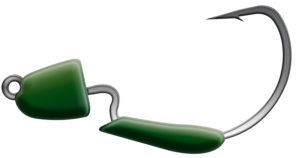 “The CrawZ is already a classic in clear water smallmouth environments,” says Joe Raymond, a leading-edge bass guide and Z-Man confidant, who is testing the new bait on the Susquehanna and Juniata Rivers, Pennsylvania. “It hasn’t been easy keeping this thing under wraps,” he laughs. “This little cray-bait’s been so good for smallmouths here that people are starting to get antsy, begging me to share my new bait.”
“The Finesse BulletZ Weedless Jighead and CrawZ combo gives finesse anglers a lot of new possibilities,” adds Clausen. “No doubt, Z-Man has taken the Ned Rig to whole new levels of cool.” 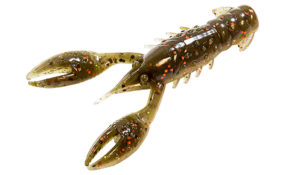