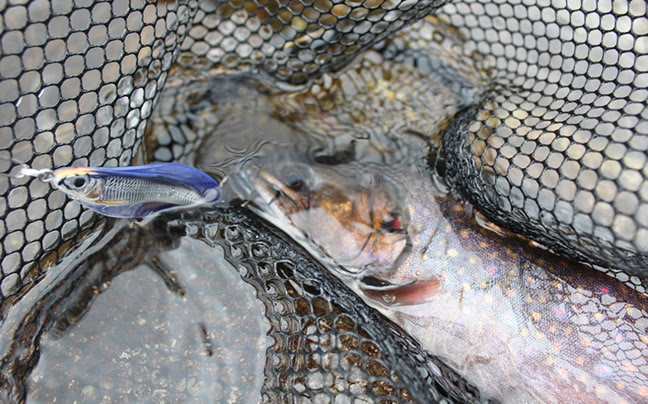 Niagara-on-the-Lake, ON (June 28, 2019) – LIVETARGET’s new Erratic Shiner behaves like a traditional casting spoon but has the narrow profile of a common Shiner or Minnow. Featuring the company’s new Injected Core TechnologyTM (ICT), it offers an unmatched baitfish profile as life-like as you—or any hungry game fish—have ever seen.

Think all casting spoons are created equal? Think again. For decades we’ve been throwing stamped pieces of metal lacking in anatomical realism. That is, until now. LIVETARGET is excited to announce the introduction of a new era of spoon design with its Erratic Shiner, a bait that has effectively bridged the tradition of old spoon craftsmanship with a new generation of tech-savvy production to create the first-ever anatomically precise spoon.

With Injected Core TechnologyTM (ICT), the life-like Inner-Core of the Erratic Shiner is constructed to mimic a small fleeing baitfish. The core is then encapsulated in a crystal clear, durable Exo-Skin that gives the lure an erratic wide-wobble action, bringing the lure to life. The metallic core attracts nearby gamefish with its pulsating flash while the Exo-Skin is less noticeable under water. Game fish focus on the natural profile of the forage and are not alarmed by the transparent action-generating mechanics.

ICT eliminates the mechanical exterior shape of a classic spoon and hosts a more anatomically correct profile inside the bait. Weight distribution of the lure makes for effortless long casts. And while its primary use is as a casting spoon, it can also be jigged and performs exceptionally when trolled. It’s also a multi-species phenom, ideal for triggering bites from everything that swims.

One of the most significant advantages of ICT is the ratio of plastic between the Inner-Core and Exo-Skin. The Inner-Core is much smaller than the overall cubic mass of the entire lure. That means anglers can present a smaller hatch size but still have the advantages of throwing a bigger bait, such as greater water displacement. The Exo-Skin adds 30% more clear plastic which adds more turbulence in the water.  Following predators are attracted to the larger commotion. For the first time ever, anglers can fish smaller hatches for big bites.

Through the design and unique ICT manufacturing process, LIVETARGET was able to really play with the exterior of the Erratic Shiner and create a unique action that you can’t get with other casting spoons. For example, most spoons will sway from side to side due to their cup shape. But the Erratic Shiner has a sway with a snap at the end of each roll. It’s the snap at the end that triggers more strikes. The cadence is easy to determine from the very first cast. It’s a very simple bait to use; simply chuck and wind.